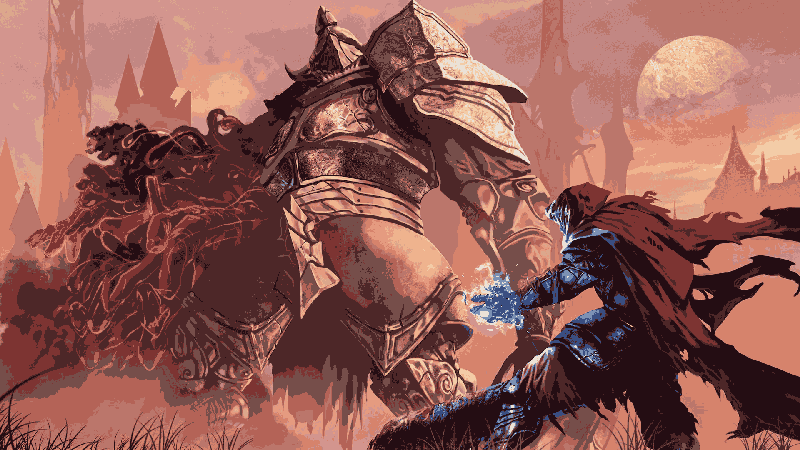 ‘Depths of the Forgotten,’ a free big addition, now features a new and dangerous zone, three new bosses, a range of exotic weapons, a weapon customization system, and an all-new, obliterating ability.

Following centuries of servitude, Man finally rebelled against the Old Gods, imprisoning these colossal calamities within the sacred walls of the Citadel. But an evil stirred within…

In a final act of vengeance, the Old Gods have unleashed a great Desolation upon the world. Mankind is fading, with but a glimmer of hope remaining.

Heavy is the burden that lies on one lone Warrior. Armed with a greatsword… of the purest Obsydian.

Challenging Combat:
Fast-paced and challenging Soulslike combat awaits, where every moment counts. Yet fortune favors the bold, and defeating the Old Gods may grant the player powers beyond mortal comprehension.

Boss Brutality:
Eldest Souls focuses on the toughest and most engaging of combat encounters – the Bosses! – with each Old God presenting a new and unique challenge for the player to overcome… with fitting rewards for those who triumph!

An Ancient Kingdom:
As you explore the labyrinthine passages, in search of the Old Gods, you’ll encounter intriguing NPCs, compelling questlines, and a series of dark and ominous mysteries. Slowly uncover the truth behind the Old Gods and their agelong imprisonment…

Pixel Perfection:
Bask in the pixel perfection of the consecrated Citadel, dripping in gorgeous 16-bit attention-to-detail. But don’t gaze too long. This monument of Human triumph has long been forgotten, and something dark has taken root deep within.

Your Build. Your Rules:
Every encounter with the Old Gods presents its own unique challenge… and rewards. Claim their celestial powers to unlock a vast array of unique Talents and Abilities, ready to customize your own combat style from a multitude of combinations.

Features:
• Battle your way through a series of uniquely challenging combat encounters
• Discover a cast of intriguing NPCs and questlines as you explore the ancient Citadel
• Unearth the mystery of the Old Gods, before total devastation befalls the World
• Bask in the glorious pixel-perfect graphic style, dripping in gorgeous attention-to-detail
• Your Build. Your Rules. Customize your own combat style from a multitude of ability combinations