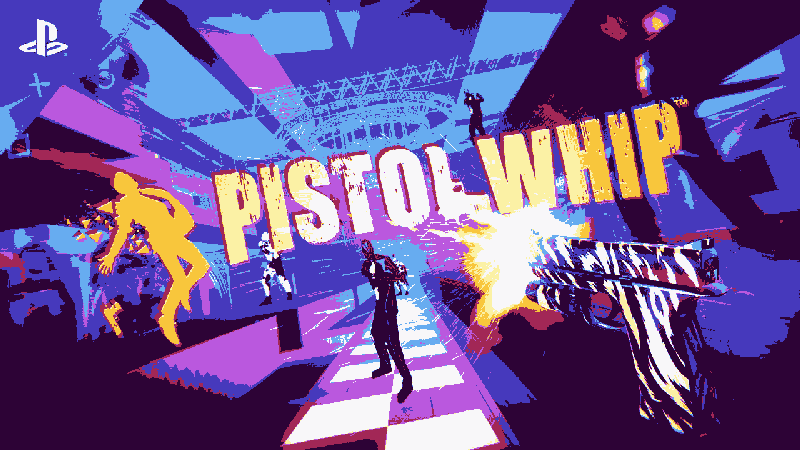 Pistol Whip, inspired by acclaimed action films such as John Wick and Equilibrium, combines the pulse-pounding excitement of a rhythm game with explosive first-person shooter gameplay. To become the ultimate action hero, you must go through a cinematic bullet hell propelled by a speeding soundtrack.

● Infiltrate a fever dream of 30 hand-crafted scenes, from bank heists to android uprisings, each uniquely designed to intense music tracks.

● Immerse yourself in two cinematic campaigns: fast forward to the future in 2089 or enjoy a blast from the past in Smoke & Thunder.

● Whether it’s a simple Daily Bounty, or the brutal Monthly Ultimatum, there’s an assignment for every hero in CONTRACTS.

● Join the party: action heroes can challenge each other and see where their score falls on local Party Mode leaderboards.

● Featuring music from Magic Sword and Seeking Blue, along with artists from Kannibalen Records, including HVDES, Black Tiger Sex Machine, and more.

● All past campaigns and updates have been included for FREE in Pistol Whip!

● Whip the way you want with the Styles system sandbox, featuring five distinct weapon types and an ever-growing selection of gameplay modifiers.

● Each unique modifier combination creates a new leaderboard, so you can challenge friends or compete solo to dominate the leaderboard for that Style.

Cinematic Campaigns: Immerse Yourself in The Story

● Smoke & Thunder: A notorious gunslinger re-emerges to roam the Old West in search of her missing sister, unwinding a deep conspiracy on the cusp of the industrial revolution. Become your favorite badass action hero, this time leveraging the classic Western trope and dropping you into the middle of the Wild Wild West, guns-ablazin’, where trains, tesla technology, and explosions set the scenes fraught with danger at every turn.

● 2089: The robot-plagued future is here, and it needs the perfect hero. It needs you. The 2089 campaign features a gritty sci-fi story and five linked scenes. Become John Asimov, as you use new weapons to survive an off-world plague of killer machines and unravel the mystery behind their violent uprising, all set to a sweet synth-wave inspired soundtrack.